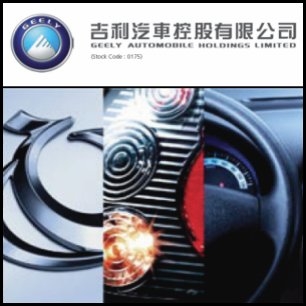 Zhejiang Geely Holding Group, parent of Geely Automobile (HKG:0175), signed a deal with Ford Motor Co. (NYSE:F) on Sunday on the takeover of Sweden's Volvo Cars. for US$1.8 billion.
Sydney, Mar 29, 2010 AEST (ABN Newswire) - Friday Wall Street ended flat, giving up its early gains after the news about the sinking of a South Korean naval ship raised fears of tension between North and South Korea. Today Asian markets could be helped by the euro-zone bailout for Greece and the news that South Korea has ruled out North Korea involvement in the navy vessel sinking. Friday Asian markets rallied with Japan's Nikkei hit its 18 months closing high. The Nikkei climbed 1.6 per cent due to relief over sovereign-debt problems in Greece. Both Hong Kong's Hang Seng Index and China's Shanghai Composite added 1.3 per cent.

NYSE:F) on Sunday on the takeover of Sweden's Volvo Cars. for US$1.8 billion. The price includes a US$200 million note with the remainder to be paid out in cash, is far less than the US$6.45 billion Ford paid for the Swedish automaker in 1999. The sale is expected to be completed in the third quarter, subject to regulatory approvals.

HKG:0939), the country's second largest lender by market capitalisation, said its net profit surged 147 per cent to 20.68 billion yuan for the December quarter, compared to a 8.4 billion yuan a year earlier. The significant increase is largely due to a lending binge and improving interest margins. Net profit for 2009 rose 15 per cent to 106.76 billion yuan, up from 92.60 billion yuan in previous year.
Taiwan Semiconductor Manufacturing Co. (TSMC) (

HKG:0981). Last November SMIC, China's largest chip maker, agreed to pay US$200 million in cash, and to issue TSMC with new shares and a warrant to settle a long-running legal dispute related to TSMC's trade secrets.

TYO:6752) is expected start mass-producing liquid crystal display panels in early April at its newly built plant in Japan three months ahead of schedule, amid rapidly growing demand for flat-screen TVs. The major electronics company, which already began trial production at the plant in western Japan, aims to raise the manufacturing capacity there in July to an annualized 4.8 million panels for 32-inch TVs.