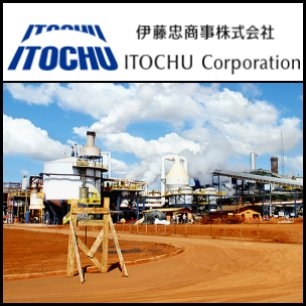 TYO:5401) decided to raise the April contract price for H-beams, which are mainly used as steel frames in buildings and factories, by a record high of just over 20 percent on the month to around 80,000 yen a ton. The price increase comes after Japan's major steelmakers accepted a 55 per cent hike in the price of coking coal from BHP Billiton (

ASX:BHP) for the April-June quarter. The Japanese steel industry relies on BHP Billiton for around 20 percent of its coking coal needs.

LON:KAH), in a move to secure supply of uranium for Japan. Kalahari holds a 40 per cent interest in Australia's Extract Resources Limited (

HKG:1398), the world's biggest lender by market value, said it plans to sell up to 25 billion yuan in convertible bonds to shore up capital. It will not need to do further fundraising in the next three years after this planned bonds sale. Yesterday the bank posted a 16% rise in 2009 net profit to 128.65 billion yuan, up from 110.84 billion yuan a year earlier. The bank also said this year it aims to increase its total assets by 12 per cent, or 1.43 trillion yuan, down from a 21 per cent surge in 2009.