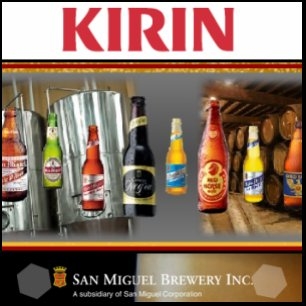 TYO:2503) wants to raise its 48 percent stake in San Miguel Brewery (PSE:SMB), possibly as high as 100 percent. While the company has not yet built a solid business in southeast Asia, Kirin Holding plans to place a higher priority on that region than China. Kirin Holdings Co. believes it is necessary to increase economies of scale in Japan through mergers, acquisitions and alliances.

TYO:6665) said it will take over part of U.S. chipmaker Spansion's (OTC:SPSNQ) flash memory research-and-development assets and hire Spansion's technicians. Elpida aims to tap growing demand for smart phones and better compete with its stronger South Korean rivals. The exact cost of the deal was not disclosed, but it will be considerably lower than Y3 billion-Y5 billion reported in the Nikkei Thursday, Elpida spokesman said.

TPE:3009) said the company has restored most operations after it halted operations and evacuated its factories and headquarters in southern Taiwan. Advanced Semiconductor Engineering (

HKG:3968) said on Thursday it will have no need to raise additional capital for the next three years after its recent launch of a rights issue to shore up its balance sheet. Earlier this week, China merchants Bank said it would launch a $3.2 billion rights issue, following domestic peers such as Bank of Communications (