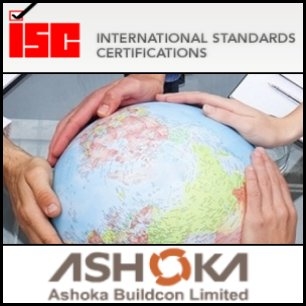 Ashoka Buildcon Sets The Greenhouse Standard In India
Mumbai, Mar 2, 2010 AEST (ABN Newswire) - Ashoka Buildcon has been independently certified by International Standards Certifications (ISC) against the international standard for greenhouse gas reporting, ISO 14064. The news comes following India's announcement in December last year that it would slow the growth of the nation's greenhouse gas emissions by 2020.

The move, by one of India's fastest growing public companies known for its innovation and industry leadership, sends a clear message to other public companies. ISO 14064 for reporting greenhouse gases provides guidance on how to effectively quantify and report greenhouse gas emissions to comply with international requirements.

The CEO and Group President of ISC, Tony Wilde, said: "Ashoka Buildcon and other large organizations in India will play a critical role in the country's response to climate change. Ashoka's leadership position on this issue places it at the forefront of global business and sets an example for all to follow."

"Businesses like Ashoka which tackle this issue head-on are well placed in the face of an emerging global carbon economy where carbon trading is increasingly taking place in international markets," said Mr Wilde.

"While global consensus on carbon emissions targets seem a way off, it is fast becoming an imperative for organizations in the energy, building and construction sectors to ensure their greenhouse emissions disclosure is credible and independently verifiable to an international recognized standard."

"In achieving the benchmark Ashoka Buildcon has become one of the first organizations in India to have its greenhouse gas emissions independently monitored and reviewed on a regular basis."

Ashoka build and operate roads and bridges in India on a Build, Operate and Transfer (BOT) basis. They engineer, design and procure the raw materials and equipment to construct infrastructure assets and buildings for third parties. In addition, Ashoka manufacture and sell ready-mix concrete (RMC) and bitumen and collect tolls on roads and bridges owned and constructed by third parties.

"Ashoka's move to gain ISO 14064 certification sends a clear message to suppliers and other public sector organizations that they too will soon have to meet the international benchmark." Being independently audited ensures the company's emissions report is accurate, complete, reliable and transparent," said Mr Wilde.

In 2007 Ashoka Buildcon was one of the first companies in India to be awarded certification for their Integrated Management System covering a number of standards including Quality (ISO 9001:2000), Environment (ISO 14001:2004) and Occupational Health and Safety (OHSAS 18001:2007). These systems cover the design, development, construction of roads, bridges, industrial buildings, residential and commercial complexes, production and sale of ready-mix concrete, operation and maintenance of road infrastructure projects, and power transmission and distribution projects.

International Standards Certifications (ISC) is one of the world's leading independent Certification and Training providers. Its major competitors include SAI Global (

ISC brings a wealth of technical expertise, professionalism and a high degree of customer focus to the market place. This, along with our high levels of customer service, means that we have grown quickly on the world scene. ISC has over 2000 customers across a number of countries. Wherever you are in the world we can serve your needs.