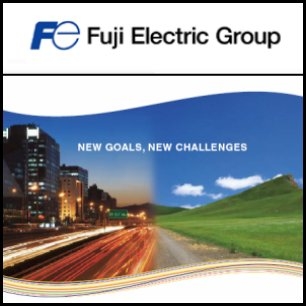 Fuji Electric Holdings Co. (TYO:6504) said that it and General Electric Co.(NYSE:GE) have agreed to establish a joint venture to design, make and sell smart power meters.
Sydney, Feb 26, 2010 AEST (ABN Newswire) - Dow index was off more than 188 points Thursday in the morning. US stocks remained in the red at the close despite the market bounced back in late trade. The fall was driven by an unexpected jump in US weekly jobless claims and increasing concerns over Greece's sovereign debt. European markets also plunged sharply and euro sank to a 12-month low against the Japanese yen. US dollar was also boosted as investors moved to safe haven.

Most Asian markets ended lower yesterday on fears of a possible downgrade of Greek debt. Japan's Nikkei lost 1.0 per cent while a rising yen weighed on exporters. Taiwan market fell 1.4 per cent and South Korean's Kospi declined 1.6 per cent. But China's Shanghai Composite rose 1.3 per cent, as investors were expecting an annual parliament session in March may reaffirm China's relatively loose monetary policy.

HKG:0670) said it is in talks with three major industry alliances, including Star Alliance, Oneworld and SkyTeam, about possibly joining. Airlines worldwide are seeking more alliances and figuring out ways to cut costs. China Eastern is the only one of the top three Chinese airlines not to belong to an alliance. But the China Eastern executive said the carrier did not have a preferred partner so far.

TYO:7269) said it would recall 432,366 units of two minicar models in Japan due to faulty parts related to air conditioning, while Daihatsu Motor (

TYO:7262) will recall 60,774 units of four minicar models in Japan due to wiring problems that could trigger airbags to inflate accidentally. This week, South Korea's Hyundai Motor (

SEO:005380) is also recalling its new Sonata sedan in Korea and the U.S. due to faulty latches on the vehicle's front doors.

NYSE:GE) have agreed to establish a joint venture to design, make and sell smart power meters that deliver electricity consumption data at households to power utilities online. The two companies plan to establish a joint firm in Japan in October for operations in both Japanese and U.S. markets.

HKG:0293) it is to take a 49 percent interest in the cargo joint venture with Air China (

HKG:0753), as part of a plan by Cathay to expand into the mainland. Cathay Pacific Airways agreed to provide 1.67 billion yuan, including aircraft and engines, to its joint-venture cargo operation with Air China. The transaction will boost Air China Cargo's registered capital to 3.24 billion yuan from 2.2 billion yuan.

TPE:3009) and TPO Displays Corp. (TPO:3195). The combined company will become Taiwan's biggest LCD panel maufacturer and the third largest in the world.