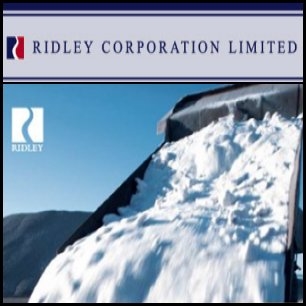 Ridley Corporation Ltd (ASX:RIC) posted a net profit of A$14.9 million for the six months to December 31, up from a loss of $50 million in the previous corresponding period.
Sydney, Feb 24, 2010 AEST (ABN Newswire) - The Australian share market finished almost unchanged on Tuesday as weakness in resources stocks offset gains in the banking sector. Asian markets were lower yesterday ahead of testimony by US Federal Reserve chairman Ben Bernanke. The benchmark S&P/ASX200 index edged up 0.8 points or 0.02 per cent, at 4718.3 points, while the broader All Ordinaries index had slipped 1.7 points, or 0.04 per cent, lower to 4731.

Australian Bureau of Statistics Wednesday is set to release labour price index and data of construction work done, both for December quarter.

ASX:AMM) is proposed to acquire voice and communications technology provider, IP Systems, for up to A$20.5 million. The company said strategic acquisition expands Amcom's product range into enterprise voice solutions and increases Amcom's addressable market. Initial consideration for the acquisition will be A$6.5 million, consisting of A$5.3 million in cash and 4.1 million Amcom shares at A$0.30 cents each.

ASX:GCL) said net profit for the six months to December 31 was to A$18.1 million, which it said was within expectations and mainly caused by a fall in the price of coal. Net profit for the first half of the 2008/09 financial year was A$44 million, when coking coal prices were at historic highs. Gloucester Coal says the outlook for the company remains positive, with the outlook for coking coal very strong.

ASX:CMJ) reported net profit for the first half of 2009/10 of A$346.20 million, compared to A$391.54 million in the previous corresponding half. The result included proceeds from the sale of its interest in jobs website SEEK and the disposal of investment property. Significantly higher interest revenue'' from the company's cash balance and lower head office costs also contributed to the result.

ASX:AMC) reported net profit before significant items was up 3 per cent to A$172.5 million The company expects earnings from its biggest business, flexible packaging for food, tobacco and medicines, should improve in the second half from a year earlier, bolstered by cost cuts. The takeover is also expected to substantially boost the company's second-half profit and produce savings through synergies of up to A$250 million over the next three years.

ASX:RIC) posted a net profit of A$14.9 million for the six months to December 31, up from a loss of $50 million in the previous corresponding period. Ridley also upgraded its profit guidance. It now expects after tax profit for the full year in the range of A$28 million to A$30 million, depending largely upon the status of the dairy sector.

ASX:ALL) calendar 2009 loss was A$157.84 million, largely due to A$274.3 million of abnormal charges, including a $187.3 million provision for a litigation. Aristocrat said its operating profit, before abnormal items, tax and minority interests, was A$116.4 million. The company says 2010 is going to be another tough year, as operational performance would continue to be affected by macro-economic factors, and the company was not expecting broader growth in key global markets before 2011.