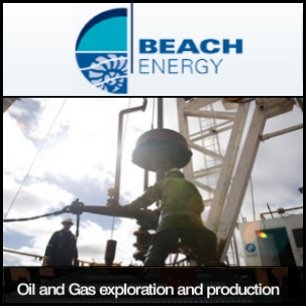 PINK:BEPTF) advises the NS377-5 oil development well (North Shadwan Development Lease, Gulf of Suez, Egypt, Beach 20%) has reached a total depth of 2909m MD (-1767m TVD SS) after intersecting a gross oil column of 107m in the Kareem Formation sandstone of Miocene age. The well was drilled as an extended reach deviated well from an onshore location. This will enable rapid completion and connection of the well to onshore production facilities.

The development program for the near shore fields is proceeding as planned, yielding results in line with, or exceeding expectations. The drilling program thus far, although technically challenging, has been undertaken efficiently and on budget by the Operator, which indicates a strong likelihood the anticipated savings and increased profitability in undertaking this development from onshore rather than offshore will be fully realised.

NS377-5 was drilled approximately 465m northwest of the NS377-3 well, which was also drilled as a development well in the last quarter of 2009 and encountered a 144m oil column. Although the gross oil column is less than in the earlier well, the reservoir quality is improved and the initial production from NS377-5 is expected to be in the same order as NS377-3 at 1500 to 2000 bopd. Crude oil will be exported about seven kilometres to the northwest via a new pipeline to Petrobel's Ras Ghara processing facility on the east coast of the Gulf. Full production from the field is expected to commence in the third quarter of this year at an initial rate in excess of 3000 bopd.

Development drilling on the NS385 Oilfield, located offshore and four kilometres southeast of the NS377 Oilfield is also planned to commence in 2010. Extended reach technology will again be utilised to penetrate the reservoir from an onshore drilling location and production will be tied into the same export route as the NS377 Oilfield. These two oilfields are estimated to contain recoverable reserves of approximately 11 million barrels (gross).