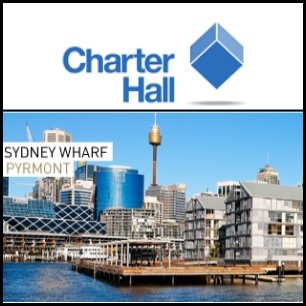 Charter Hall Group (ASX:CHC) will raise A$305 million in new equity to buy the majority of Macquarie Group Ltd.'s (ASX:MQG) Australian real estate management platform.
Sydney, Feb 15, 2010 AEST (ABN Newswire) - The Australian sharemarket eased some early gains and closed slightly higher on Friday. This was the first weekly gain in five weeks while the global markets had been shadowed by China's monetary tightening, worries on US economic recovery stability and sovereign debt issue in Euro zone.

Reserve Bank of Australia data showed that Australians' total value of credit and charge card transactions increased by 10.03 per cent in December to A$22.020 billion, up from A$20.012 billion in November.

ASX:AVO) offer for its shares in Dioro Exploration NL (

ASX:DIO), while the Ramelius board took into account the risks associated with a minority holding in Dioro. Ramelius said it is cashed up and looking to other opportunities, after agreeing to sell its 37.51 per cent stake in Dioro to Avoca for about $A22.33 million and 11.16 million Avoca shares.

ASX:CHC) will raise A$305 million in new equity to buy the majority of Macquarie Group Ltd.'s (

ASX:MCW), as well as 3.5 per cent of Macquarie Direct Property Fund, for A$189 million.

ASX:LEI) Friday reported a big jump in its first-half net profit, which rose to A$288.9 million from A$111.2 million a year earlier, but the previous year's results included writedowns on stakes in builders and toll-road operators due to the effects of the global financial crisis on valuations. Leighton remained its full-year guidance, saying full-year net profit should be in excess of A$600 million.

ASX:NCM) posted a 14.4 per cent increase in first half net profit to A$176.2 million for the six months to December 31, 2009, up from A$154 million in the prior corresponding period. Gold production has dipped 6 per cent, but copper production has risen. The company said Newcrest is in a strong position with low gearing, a number of growth projects nearing completion.

ASX:GPM) delivered a net profit of A$8.25m in the six months ended December 31, compared with a net loss of A$114.83 million for the first half of last year. The company said the strength of underlying earnings and positive outlook has allowed the group to reinstate distributions to security holders with directors declaring an interim dividend of 1c, fully franked, payable on March 25 to security holders registered March 8.

PINK:MUMTF) has reported the results of a scoping study for its 100% owned Rocklea Iron Ore Project, located about 30km from the town of Tom Price in Western Australia's Pilbara Region. The results of the scoping study have shown that an economically robust project is possible at Rocklea, with resources sufficient to support potential production rates of up to 10Mtpa.

ASX:RAU) has received results from the RC drilling programme undertaken in December 2009 at its 100%-owned Tregoora Gold Project in Far North Queensland. Drilling took place at the Terrace Creek, Sleeping Giant and Retina South Prospects with a total of 2,252 metres of RC percussion drilling completed before the wet season commenced. The remaining 2,700 metres of the planned 5,000-metre programme will be completed following the wet season.