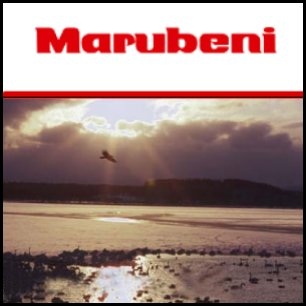 Japanese trading giant Marubeni Corp.(TYO:8002) has won a US$250 million contract to build one of the world's largest biomass and clean coal co-generation plants in Singapore.
Sydney, Feb 10, 2010 AEST (ABN Newswire) - US stocks broadly gained on Tuesday on hope of a bailout for heavily indebted Greece. A senior German ruling coalition source said euro zone governments have decided in principle to help Greece. Commodity prices and resources shares were boosted and the euro rose against the US dollar after the news.

TYO:6773) said it will issue up to 92 million new shares in an international offering, including a maximum of 12 million shares under an overallotment arrangement. Pioneer aims to strengthen its financial base to achieve medium- to long-term growth in the car electronics business and bolster its business in emerging countries. Mitsubishi Electric Corp. (

TYO:6503) will buy Y3.8 billion worth of the shares while Mitsubishi Chemical Holdings Corp. (

TYO:7201) has returned to profit in the third quarter from a year earlier, thanks to its strength in the Chinese market as well as the impact of cost-cutting measures. Its operating profit was 134.07 billion yen for the October-December quarter, up from a loss of 99.19 billion yen in corresponding period last year. Nissan also raised its annual forecast for the year ending in March, expecting an operating profit of 290 billion yen, up from the 120 billion yen profit it forecast in November.

TYO:8002) has won a US$250 million contract to build one of the world's largest biomass and clean coal co-generation plants in Singapore. Marubeni was awarded the contract by a subsidiary of Tuas Power Ltd, a major power company in Singapore owned by China's Huaneng group. Marubeni also said it is eyeing more such opportunities in Southeast Asia, especially in Indonesia and Malaysia.

NYSE:CHU) will explore joint investments in parts of Asia and Africa where they are not already present, said China Unicom's chairman. Telefonica holds just over 8 percent of China Unicom, which in turn holds 0.87 percent of the Spanish telephone operator.