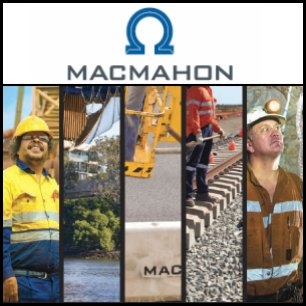 Macmahon Holdings (ASX:MAH) has won two limestone quarrying contracts worth US$140 million with the biggest cement maker in the world, France's Lafarge (EPA:LG).
Sydney, Jan 25, 2010 AEST (ABN Newswire) - The Australian sharemarket posted a sharp loss for second straight day to a one-month closing low on Friday. The market pressured by worries about a slowdown in China and concerns over U.S. President Barack Obama's proposed stricter regulations on banks. At the close, the benchmark S&P/ASX200 index and the broader All Ordinaries index both tumbled 1.6 per cent. For the week, the ASX 200 fell 3.2 per cent, its worst weekly return in 12 weeks.

ASX:NAB) has completed its confirmatory due diligence for the proposal under which NAB would acquire AXA APH and divest AXA APH's Asian business to the insurer's French parent AXA SA. Discussions cannot commence until the exclusivity arrangement between AXA SA and AMP Limited expires on February 6.

ASX:WPL) December quarter revenue was A$1.26 billion, down 23 per cent from A$1.64 billion for the same period in 2008. Its fourth-quarter output was 20.2 million barrels of oil equivalent (boe), down 13 per cent from a year earlier and missed its full-year production target. Woodside also forecasts production in 2010 to fall slightly to range between 70-75 million boe.

ASX:MIG) has reduced the valuation of its portfolio by 0.3 per cent as the appreciation in Australian dollar cut the value of revenue from its Macquarie Atlas Roads asset portfolio. The portfolio valuation, excluding cash and non-investment balances was A$5.08 billion as of December 31, compared with A$5.09 billion at June 30, 2009.
Macmahon Holdings (

ASX:MAH) has won two limestone quarrying contracts worth US$140 million with the biggest cement maker in the world, France's Lafarge (

EPA:LG). The largest of these project awards is Ewekoro, a six and a half year contract in Nigeria valued at $US105 million. Additionally, Lafarge has awarded Macmahon a five year, US$35 million contract extension at the Kanthan limestone quarry in Malaysia.

ASX:AAC) has downgraded its profit guidance to a loss of between A$53 million to A$60 million for 2009. AAco said the financial results have been negatively affected by extreme climatic factors, which, combined with a range of external market factors, created a uniquely adverse trading outcome.