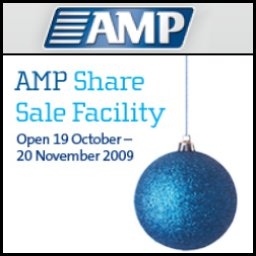 AMP Ltd (ASX:AMP) has launched a share sale facility so shareholders with small parcels can sell their shares without incurring brokerage or transaction costs. AMP said it is offering the share sale facility in response to enquiries from retail shareholders about how they can sell small parcels of shares without incurring a brokerage fee.
Sydney, Oct 16, 2009 AEST (ABN Newswire) - US stocks climbed to a 2009 new high on Thursday, as the oil prices surge buoyed energy companies. New York crude oil futures rose more than 3 per cent to a one-year high of US$77.58 a barrel after the government said US gasoline reserves fell sharply last week. The financial and IT stocks retreated over mixed economic data and corporate outlook.

The Australian shares extended their gains yesterday with strong lead from Wall Street. But the market fell back from earlier highs as investors took profit from recent rallies. The benchmark S&P/ASX200 index finished 28.8 points, or 0.6 per cent higher, at 4859.9, while the broader All Ordinaries added 28.5 points to 4862.5.

Reserve Bank of Australia data showed that Australians are shunning their debts and instead using cash and debit cards. The value of purchases and cash advances on credit and charge cards fell 1.57 per cent to A$18.865 billion in August, compared to previous month. Total EFTPOS purchases, including cash withdrawls, rose 2.15 per cent to A$11.882 billion in the month.

Reserve Bank governor Glenn Stevens yesterday warned that interest rates will continue to climb even faster than people believe. The Reserve could lift rates to 4 per cent from their current 3.25 per cent by early next year as there are growing concerns within the Reserve about inflation not falling as low as it had expected.

United Minerals Corporation (ASX:UMC) has received a conditional offer, under which a subsidiary of BHP Billiton (ASX:BHP) proposes to acquire all of the issued shares in UMC via a board recommended Scheme of Arrangement. BHP Billiton will offer UMC shareholders consideration of A$1.30 cash for each UMC share. The transaction values UMC at approximately A$204 million.

A wholly-owned subsidiary of Guinness Peat Group (Australia) Pty Limited (ASX:GPG) said it has increased its offer price in relation to its on market takeover offer of MMC Contrarian Limtied (ASX:MMA) from A$0.48 to A$0.50 per share. GPG, which currently owns a 28.99 per cent stake in MMC, said the increased offer is final and will not be further increased.

Drummond Gold (ASX:DGO) has an agreement with Alliance Resources (ASX:AGS) to acquire Maldon Resources Pty Ltd, a subsidiary of Alliance. Maldon is the owner of the Maldon gold project, a historically significant goldfield. Under the agreement, Drummond Gold will issue 88.4 million shares to Alliance for the acquisition of Maldon. Consideration for the transaction was based on a share price of 6.1c.

AMP Ltd (ASX:AMP) has launched a share sale facility so shareholders with small parcels can sell their shares without incurring brokerage or transaction costs. AMP said it is offering the share sale facility in response to enquiries from retail shareholders about how they can sell small parcels of shares without incurring a brokerage fee.

MAp Airports (ASX:MAP), formerly known as Macquarie Airports, says it has completed the internalisation of its management, with several senior management changes. The airport asset owner received securityholder approval of its split from Macquarie Group on September 30. MAp is to make a cash payment of A$345 million to Macquarie in exchange for the management rights.