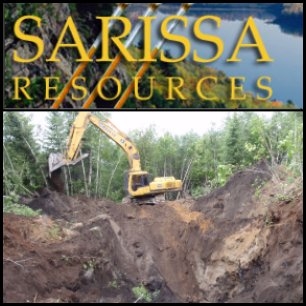 Sarissa Resources Inc. (PINK:SRSR) First Results Of Its Niobium Trenching Program At Nemegosenda Project
Oakville, ON, Sep 4, 2009 AEST (ABN Newswire) - Sarissa Resources Inc. (PINK:SRSR) is pleased to release the first results from the summer trenching program in the SE Zone of its 100% owned niobium property in northern Ontario. During June and July four trenches were opened up to test for continuity of the mineralization reported in previous programs.

The trenching program was conducted initially under the supervision of the late Alan Hawke, and followed up on by geologist Hillar Pintson. It was conducted in the middle of the SE Zone, where 2.5 metre continuous channel samples were collected along the northern side of trench 09-5A to be submitted for assaying.

Results of the first sample submitted have been received from Activation Laboratories in Ancaster.

This sample was taken at the approximate half-way point in the trench and returned the following results:
Of significance is that this trenching program was carried out in an area of the SE Zone that had not previously been drilled, so continues to expand the area of potential mineralization in this area. As the Company waits to receive the assays on the remaining 48 samples submitted, preparations will be undertaken to get ready for drill testing and continued delineation of the zone.

The SE Zone "occurs 1500 metres south east of the Hawke Zone. From the 1955 and 1956 drilling programs by Dominion Gulf, plus re-assaying of nine drill holes by Musto Explorations in 1988 which covered this area, a historical resource of Niobium mineralization was indicated to exist within an area of some 700m X 250m to a depth of 200m" ("Technical Report on the Nemegosenda Property for Sarissa Resources Inc."- July 21, 2009-Billiken Management Services Inc.)

The drill core from the summer drilling of the Hawke Zone has been logged and split and also submitted for assaying. These three vertical holes continued on from the original nine hole program completed earlier this year. The previous drilling program had indicated a resource of 11,000,000 tonnes of 0.46% Nb2O5 within the Hawke Zone (previously the D Zone) as outlined in the Technical Report prepared by Billiken Management Services Inc. in July, 2009. The three holes just completed ended with continued high readings using a hand-held scintillometer. Based on this, preparations are underway to bring a larger drill rig to this zone in order to further test the depth extension. In the winter program drill hole 09-73 had returned results of 45 m grading 0.77% Nb2O5 from a vertical depth of 194 m to 239 m.

Readers are cautioned that scintillometer readings are not directly or uniformly related to grades of the rock samples measured and should be used only as a preliminary indication of the presence of radioactive materials. Sarissa uses scintillometer readings as a reliable guide for its continuing exploration program. For general comparisons of scintillometer cps readings vs. assay results, please review results posted at Sarissa's website comparing historical results.

Dr. Cam Cheriton, a director of Sarissa, is a "qualified person" within the meaning of National Instrument 43-101 and has read and is responsible for the technical information contained in this news release.