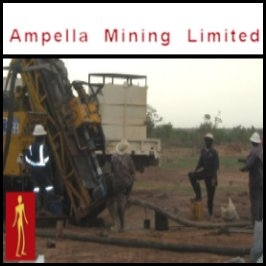 The Batie West Project consists of five permits which encompass a 110km long gold-bearing shear zone over the southwest margin of the Boromo Greenstone Belt.

A major objective for the upcoming drill program is to provide resource estimates for both the Konkera Main and Konkera North Prospects. In addition, the drill programs will look to extend the known strike extents of gold mineralisation at these Prospects as all systems remain open both along strike and at depth.

At the Konkera Main Prospect mineralisation extends over 1km in strike and all 31 previous drill holes intersected significant gold mineralisation of grades above 0.5 g/t Au. Best intercepts from that program included:

A total of 27 RC drillholes for approximately 3,200 metres are planned for resource definition on the western margin of Konkera Main. An additional 32 RC drillholes for approximately 2,600 metres are outlined to test a recently discovered adjacent auger geochemistry target on the eastern margin of Konkera Main.

Gold mineralisation is then continuous for an additional 2km to the north of Konkera Main over an area called Konkera North, where all 17 previous drill holes have also intersected significant gold mineralisation. Best intercepts included:

A total of 39 RC drillholes for approximately 4,100 metres are planned for resource definition at Konkera North.

In addition to the planned RC drill programs mentioned above, an aircore drill program of approximately 3,600 metres will be used to further define gold geochemistry targets over an area of 1km2 between the Kouglaga and Konkera North Prospects where deep ferricrete horizons have limited previous conventional auger and soil geochemistry programs.

The program is expected to cost approximately $1.5 million and take approximately 6 weeks to complete. Results will be released to the market when available.

A series of preliminary metallurgical tests have been commissioned to determine the amenability of the gold to gravity and conventional cyanidation recovery on prepared samples of drill cuttings and core from the previous drilling phase.