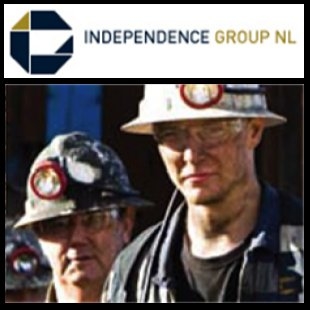 AngloGold Ashanti (ASX:AGG) will begin feasibility study at the Tropicana gold project along with its joint venture partner Independence Group NL (ASX:IGO). AngloGold Ashanti Ltd says mining could commence at its Tropicana gold project in Western Australia by 2013, provided all further studies and approvals are positive.
Sydney, July 28, 2009 AEST (ABN Newswire) - US stocks closed slightly higher on a strong sign of recovery in US housing sector. The Commerce Department said on Monday that sales of new homes rose by 11% in June. Earning news dominated the market in recent trading sessions with most of the reports beating the expectation.

An Access Economics report predicted that Australia's investment levels would continue to fall during the coming year. Investment spending was A$12.2 billion or five per cent weaker at the end of June 2009, compared with a year earlier, Access Economics says. But investment during the June quarter grew by A$6.9 billion to $230.4 billion, primarily because of federal and state government infrastructure projects.

Gaming giants Tabcorp Holdings (ASX:TAH) and Tatts Group (ASX:TTS) say they may be interested in acquiring TOTE Tasmania. Tabcorp confirmed that it has lodged an expression of interest, but it has not formed any view as to whether it will lodge a binding bid for TOTE Tasmania. Tatts Group also said the Australian Competition & Consumer Commission is inquiring about the company's participation in the sale of Tote Tasmania. Tatts said it won't necessarily lodge a binding bid, but that it will keep the market informed of developments on its involvement in the sale process.

Babcock & Brown Infrastructure (ASX:BBI) said that it has revised an agreement to sell a stake in Euroports S.A. with the purchasers to take a larger share at a reduced price. BBI has sold 40% of the company for EUR141.5 million and recognize a pretax impairment of around EUR120 million on disposal of the stake.

FlexiGroup (ASX:FXL) has previously provided market guidance in the range of A$28 million to A$30 million for FY09. It currently expects full year net profit to be around A$32 million as a consequence of the earlier realisation of synergies from the acquisition of Certegy.

Centro Properties Group (ASX:CNP) says the preliminary property valuation results shows its Australian and US property portfolios fell by A$2.6 billion in the second half of its financial year. Centro will release its full year results on August 26.