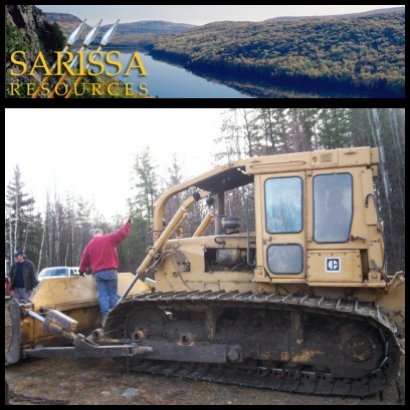 Sarissa Resources Inc. (PINK:SRSR) Releases Independent Technical Report Covering The Nemegosenda Property
Oakville, ON, July 28, 2009 AEST (ABN Newswire) - Sarissa Resources Inc. (PINK:SRSR) is pleased to announce the completion of an independent technical report on its 100% owned niobium property in northern Ontario. The report was prepared by John C. Archibald, P.Geo. of Billiken Management Services Inc. of Toronto, and was prepared to standards as outlined by National Instrument 43-101 Standards and Disclosures for Mineral Projects ("NI 43-101.") The full report will be available for review on the Sarissa website.

The report summarizes both the results of work carried out during 2008 & 2009 as well as all known historical exploration work and reports on the Nemegosenda Property owned by Sarissa.

Excerpts from the report include:

"Sarissa Resources Inc. undertook a nine-hole diamond drilling program from November 2008 to February 2009, to test the reported Niobium mineralization occurring within the previously outlined 'D' Zone, on the Nemegosenda property. The nine holes totalled 1842 metres of which 1728 metres were assayed. Both the drilling, twinning of a number of the holes and drill-core analytical results show a high degree of reproducibility in values in Niobium content. This data provides further support for the reproducibility of the Niobium grades that were outlined by previous Musto Exploration and Dominion Gulf exploration results over the two areas on the property ('D'Zone and 'South-East' Zone) and gives credibility to the historical reserve estimates. Firstly, the 'D' Zone area likely contains a minimum of 20 million tons grading 0.45 % Nb2O5 and perhaps upwards of 40 million tons that was indicated by the previous programs and that the 'South-East' Zone likely contains another 20 million tons grading 0.35% Nb205 and both have good potential for hosting further resources of Niobium."

It is also with regret that Sarissa announces that Alan Hawke passed away on July 21st, 2009. Mr. Hawke had served as a director of Sarissa and directly oversaw the Company's exploration program. Scott Keevil, President of the Company said, "On behalf of Sarissa, we would like to express our most sincere condolences to Alan's family and friends and recognize his outstanding service to the Company. We will greatly miss Alan; his zest for life and valued advice."

As tribute to Mr. Hawke, the Company has renamed the D Zone the Hawke Zone.

Dr. Cam Cheriton, a director of Sarissa, is a "qualified person" within the meaning of National Instrument 43-101 and has read and is responsible for the technical information contained in this news release.

This press release contains statements, which may constitute "forward-looking statements" within the meaning of the Securities Act of 1933 and the Securities Exchange Act of 1934, as amended by the Private Securities Litigation Reform Act of 1995. Those statements include statements regarding the intent, belief or current expectations of Sarissa Resources, Inc., and members of its management as well as the assumptions on which such statements are based. Prospective investors are cautioned that any such forward-looking statements are not guarantees of future performance and involve risks and uncertainties, and that actual results may differ materially from those contemplated by such forward-looking statements. Important factors currently known to management that could cause actual results to differ materially from those in forward-statements include fluctuation of operating results, the ability to compete successfully and the ability to complete before-mentioned transactions. The company undertakes no obligation to update or revise forward-looking statements to reflect changed assumptions, the occurrence of unanticipated events or changes to future operating results.