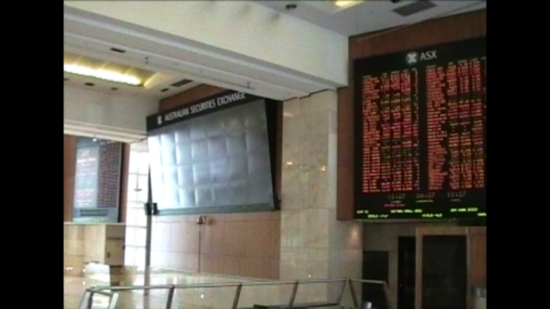 Hoping Earnings Improvement in US Banks
Sydney, April 14, 2009 AEST (ABN Newswire) - Overnight US stocks ended mixed. Investors were hoping improvements in banks which will unveil their earnings report this week. But the market was also weighed by speculation that the US government is preparing General Motors for a bankruptcy filling by June 1.

Analysts say Reserve Bank of Australia is forced to cut its rates by large measures while major banks only pass on a minute rate cut to customers after RBA's latest 25 basis points reduction. The RBA is expected to slash official interest rate as low as 2 per cent this year.

The Australian Property Monitors group says Australia's home prices have been lower across the country, with the number of properties sold at auction falling dramatically in the first quarter of the year. Sydney and Perth showed the sharpest falls, with average prices dropping by more than A$150,000.

Today the National Australia Bank business survey for March is released. The Australian Bureau of Statistics will release lending finance data for February.

Qantas (ASX:QAN) says it is not in any active discussions on mergers with Malaysian Airlines and not pursuing further discussions on potential maintenance, repair and overhaul joint ventures. An official from the Malaysian carrier insisted yesterday that the airlines were still in talks.

Transport infrastructure operator Asciano Group (ASX:AIO) has extended a deadline for bids on its port and rail assets until the end of this week, as some bidders requested the extension due to the Easter break.

Travel agency Flight Centre (ASX:FLT) has flagged more jobs cut to reduce costs. Flight Centre has already cut about 1000 jobs globally over the past 15 months, most from its newly acquired US travel business, Liberty.

Recruitment firm Hamilton James & Bruce (ASX:HJB) has reported a A$5.9 million half-year loss. HJB's auditor, PricewaterhouseCoopers, said there "is a significant uncertainty whether the company will continue as a going concern".

Telstra (ASX:TLS) will consider a voluntary separation of its wholesale and retail arms as well as the sale of some assets to the government's proposed A$43 billion broadband network. The company's board has set up a special committee of directors and executives for a new approach and negotiation with the Government.

Woodside Petroleum (ASX:WPL) has decided not to go ahead a $US100 million expansion of the BHP Billiton (ASX:BHP) operated Stybarrow oilfield project in an effort to conserve cash to pay for its liquefied natural gas (LNG) strategy.

Qantas (ASX:QAN) said today the company will slash up to 1750 jobs, including 500 management positions. Qantas said it would cut freight capacity both internationally and domestically and also decrease its full year pre-tax profit outlook to between A$100 million and A$200 million, down from its previous forecast of A$500 million.