OTCMKTS:CNPTF) advises that WM28, the second development well in the Mereenie Development Programme was completed on 6th September 2021.

- WM28 has been successfully completed as a dual zone production well (Pacoota-1 and Pacoota-3) with good flow test results and is expected to be tied-in to the gathering network by mid-September.

o Increases confidence that extensive sections of the Stairway Sandstone could be productive at Mereenie.

o Potential to double the Proved and Probable (2P) gas reserves at Mereenie if the existing 108 PJ of 2C contingent gas resources attributed to the Stairway Sandstone can be upgraded (54 PJ net to Central).

WM28 was successfully drilled to a depth of 1,332m and completed as a selective dual zone gas producer, accessing both the upper reservoir (Pacoota-1) and the lower reservoir (Pacoota-3) in a crestal location. The Pacoota-1 was air-drilled, cased and perforated whilst the Pacoota-3 was air-drilled and left open hole to maximise flowrates. Based on rig flow tests, the combined Pacoota-1 and Pacoota-3 gas flow rate once online is expected to be at the high end of the range anticipated.

In addition, virgin reservoir pressures and sustained flow rates were observed from a 34 metre vertical intersection of the Upper Stairway Sandstone during drilling (Figure 2*). A rig flow test of the Upper Stairway maintained a production rate of 0.6 mmscfd over a period of 50 minutes with minimal decline observed. The well continued flowing at similar rates for 19 hours while drilling ahead before penetrating the next productive interval in the Pacoota-1. Whilst the Stairway is typically considered to be tight, the presence of natural fractures provides sufficient permeability which can be exploited through deviated or horizontal drilling techniques (as occurs in the Pacoota at Palm Valley).

The successful flow test in the Upper Stairway provides a good indication of the presence of open natural fractures at WM28. This is consistent with fracture modelling which indicates a high likelihood of natural fractures (predominantly vertical) in the crestal region of the Mereenie field. Significant flows obtained while drilling through the Stairway have also been recorded in prior development wells, indicating there could be extensive portions of the Stairway amenable to commercial production with horizontal wells. Further Stairway appraisal would target those areas with evidence of good flows (such as WM28) to reduce the risk of encountering mineralised fractures, as was the case in the prior Lower Stairway appraisal well, WM26.

There is currently 108 PJ of 2C contingent resource booked in the Stairway (54 PJ net to Central). Further appraisal of the Stairway using horizontal drilling techniques to better access the vertical fracture network could deliver significantly higher flow rates and convert this resource into reserves. The 2P reserves at Mereenie would approximately double if all the 2C resource currently attributed to the Stairway could be converted to 2P reserves, which would increase the field capacity, production plateau and economic life of the Mereenie field.

Given WM28's good Stairway results and the high-value associated with brownfield economics, Central intends to work with its Mereenie joint venture ("JV") partners to progress possible Stairway appraisal opportunities for this material resource.

Works are underway to connect WM28 to the gathering network, with the well expected to be online by mid-September. The rig will return to WM19 (previously recompleted) to attempt shut-off of water production believed to be sourced from a lower interval that is not contributing gas flow. After that, the rig is intended to return to WM27 to complete it as a Pacoota-1 producer. The JV has resolved not to proceed with the Pacoota-3 side-track due to concerns regarding localised hole instability encountered in the first attempt. Although WM27 will no longer be able to accelerate recovery from the Pacoota-3, the JV expects that the reservoir at this location will still be adequately drained by other wellbores over the field life. Based on test results to date, the recompletion and drilling program has already increased Mereenie wellhead capacity to over 40 TJ/d (100% JV), easily meeting economic hurdles for the investment.

Further updates will be provided as the programme progresses and at an investor presentation to be held shortly after the release of Central's 2021 Annual Report and financial results later this month. Details of the date and time of the presentation will be advised later this week. 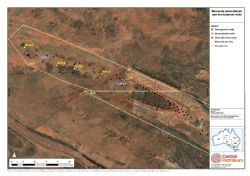 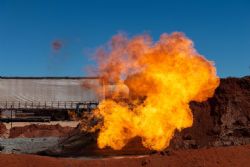