OTCMKTS:EEGUF) is pleased to advise shareholders that it has received Northern Territory Government approvals for the drilling of Carpentaria-1, to be located in EP187.

With formal Northern Territory Government approvals for the drilling of Carpentaria-1 now in place, Empire can finalise the well design and carry out formal tendering with service providers.

Once that process is complete, Empire will inform shareholders of its final investment decision regarding the drilling of Carpentaria-1 and the start date of the drilling program.

Empire is one of the first companies active in the McArthur and Beetaloo Basins to be granted Northern Territory Government approvals for drilling under the new regulatory framework.

Carpentaria-1 is a planned vertical well to be located in EP187, to appraise the Velkerri and Kyalla Shales. The prognosed depth of the well is ~2,900m.

The recent 2D seismic program carried out by Empire shows the top of the Velkerri Shale to be at approximately 2,200m depth and to be 600m thick, and the shallower Kyalla Shale located at a depth of approximately 1,200m at the Carpentaria-1 well location.

Empire's technical team has been working closely with its Well Engineering and Project Management consultants, InGauge Energy, to finalise the well engineering design of Carpentaria-1.

The most likely well design incorporates an extensive formation evaluation program including coring which will provide valuable technical information regarding hydrocarbon composition and content, and rock mechanical properties of the Velkerri and Kyalla Shales in EP187.

This data will inform Empire regarding the likely recoverable volumes of hydrocarbons in its EP187 Phase 1 Work Program Area (see Figure 1) which extends across 160km2 and the hydrocarbon composition of the Velkerri and Kyalla Shales (crude oil vs natural gas liquids vs dry gas). Mechanical rock properties information will focus the key target formations for design of future fracture stimulation programs which are critical for flow testing and ultimately commercial hydrocarbon production.

Additional evaluation activities on Carpentaria-1 after the initial drilling program would be subject to a separate Northern Territory Government approval process which has already commenced. 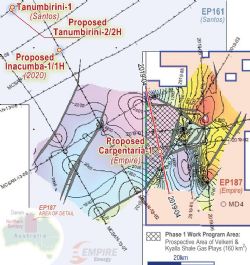