Ian Rutherford Plimer is an Australian geologist and academic. He is a prominent critic of creationism and of the theory of anthropogenic global warming. He has authored approximately 60 academic papers over 36 years, and six books.

Plimer is currently Professor of Mining Geology at the University of Adelaide. He was previously a Professor in the School of Earth Sciences at the University of Melbourne. He is also a prominent member of the Australian Skeptics. He was awarded the Clarke Medal by the Royal Society of New South Wales in 2004. 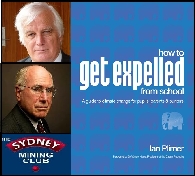 The Australian Mining Industry has been blessed with one straight talking politician - Tony Abbott. His positions on a Flow Through Share Scheme, the MRRT and the Carbon Tax have been resoundingly clear and courageous. And now his mentor John Howard is preparing to show his hand on the Labor's Carbon Tax by personally launching Ian Plimer's new and much anticipated anti-Warmist manual for the younger reader…