Among the largest independent oil and natural gas exploration and production companies in the world, with 2.28 billion barrels of oil equivalent (BBOE) of proved reserves at year-end 2008. 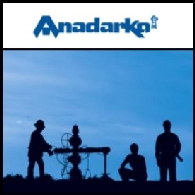