METRO AG is a Germany-based trading and retail company. It acts as a holding company for the METRO Group, which is organized into four independent sales divisions: Metro Cash & Carry/Makro Cash & Carry, which are engaged in cash and carry wholesaling worldwide; Real, which operates a chain of supermarkets, as well as a network of hypermarkets in Germany, Russia, Poland, Romania and Turkey; Media Markt and Saturn, which sells consumer electronics across Europe, and Galeria Kaufhof, a chain of department stores in Germany and Belgium. The Company is active in more than 2,200 locations in 31 countries in Europe, Africa and Asia. Its sales divisions are supported by cross-divisional service companies, offering procurement, logistics, information technology, real estate management and business solutions. In January 2007, the Extra sales brand with 245 supermarkets was sold to the Rewe Group with effect from July 1st, 2008. METRO AG is headquartered in Dusseldorf, Germany. 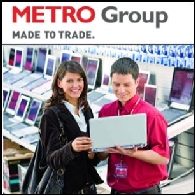